2017 Junior Pan American Badminton
Championship Results
Ottawa, ON – From July 21st to the 28th, Canada welcomed countries from across the
Americas to the 2017 Junior Pan American Badminton Championships. With over 250
athletes proudly representing their home nations, competition was strong and the crowd
was excited as players battled to be Junior Pan Am Champions! The Markham Pan Am
Centre in Ontario was home to badminton athletes, coaches, and supporters throughout the
week in hosting both the Team Event and Individual Competitions.
In the Team Event, athletes collectively compete in each discipline against another country
in a best of 5 series. With Canada selecting 15 of their top Junior athletes to participate in
the event, Canada was primed to start the competition on top. Through two days of the
competition, Canada was undefeated in matches, winning over Peru, El Salvador, and
Mexico. Heading into the Championship Final, Canada was set to play against USA for Gold.
After a series of close and tough matches, Team Canada would have to settle for Silver as
they were unable to claim the 2017 Championship title, losing to USA with a score of 1-3
despite a strong performance by local, Brian Yang. Regardless of the tough loss, Canada
remained optimistic leading into the Individual competition. Looking forward to the week
ahead of them, Team Canada was ready to seize the next opportunity that remained in the
coming days.
As the Individual Competition approached, Canada fielded the largest team of any nation
with 85 athletes. Each Team Canada athlete, from age groups U11, U13, U15, U17, and U19,
were provided official Team Canada clothing by Yonex which were part of the world
premiere of the 2017-18 Yonex Competition shirts. With Team Canada looking strong in our
nations colors as they stepped on the court, athletes were ready to play for gold!
In the U11 age group, two of Team Canada’s youngest competitors, Matthew Yu and Liam
Zhang were able to make it to the Championship Finals in Boy’s Doubles. Although they
were unable to secure gold in a loss of (12-21, 16-21) to a pair from USA, both athletes
displayed great effort and sportsmanship in their silver medal win. Similarly, Boy’s Doubles
partners Ryan Chen and Gabriel Ching competed proudly, finishing 3/4 and winning a
bronze medal for Canada. On the girl’s side, Girl’s Doubles partners Katie Lau and Lyric Su
were also able to win a bronze medal by making it through to the Semi-Final.
For the U13 age group, Boy’s Singles Champion Joshua Nguyen was able to secure the first
gold medal for Canada on home soil. In a tough 3-game match against USA’s Robert
Shekhtman, Joshua was able to hold on to win (21-15, 17-21, 21-17), and be Canada’s first
2017 Junior Pan Am Champion of the week. Joshua’s talents also lead him to the
Championship Final in Mixed Doubles with partner Jackie Dent. The pair competed hard
despite losing a first close game 22-24, and were unable to comeback to play for a third
game, earning them a well-deserved silver medal. Julian Lau and Natalie Nakatsui also
finished on the podium with a 3/4 finish, giving Canada two medals in the Mixed Doubles
Event.
A U13 Boys Doubles pair, Jeffrey Liu and Timothy Lock played hard throughout the week,
landing them in the Semi-Finals. Despite a strong performance, the two were happy to finish
on the podium, earning a bronze medal for Canada.
The U15 category brought on another Junior Pan Am Champion, Rachel Chan, winning the
Girl’s Singles (21-14, 17-21, 21-12). With amazing matches throughout the week, Rachel
was able to carry her performance though other events, winning a bronze medal with
partner Ivan Li in Mixed Doubles.
On the U15 Boys side, Victor Lai was also able to win multiple medals for Canada in both the
Boy’s Singles event, and Boys Double’s with partner, Win Liao. With tough matches
throughout the final days of competition, Victor was unable to reach the
Championship Final, but was still proud to take home two bronze medals. Alongside Victor
in the Boy’s Singles, also finishing in the 3/4 position, was fellow Canadian teammate, Minh
Cheng. After a tough match in the Semi-Finals, Minh too fell short of competing in the
Championship Final, but was happy to leave with bronze.

The U15 Girl’s Doubles has similar fates, partners Jeslyn Chow and Alayna Walia, as well as
Jessica Cheng and Sophia Nong, were all able to reach the Semi-Final of the Individual
Competition, earning them all a well-deserved bronze medal for the 3/4 finish.
The U17 age group is where Team Canada showed the most success, with Team Canada
sweeping the podium in the Girls Single’s event. The Junior Pan Am Champion in the event
was Markham’s own Talia Ng, edging out a very talented Eliana Zhang (21-19, 21-12).
Finishing in 3/4 was Catherine Choi, who fell short in a 3-game match against Talia Ng (21-
19, 10-21, 11-21). Rounding out the podium was Crystal Lai, losing to Eliana Zhang (15-21,
17-21).
Despite the loss, Crystal Lai was able to bounce back to compete in the Mixed Double’s
Championship with partner Kyle To. After losing the first set (15-21), the pair was able to
comeback in the second and win the third game (15-21, 21-14, 2119) to become Junior Pan
Am Champions.
In the Girl’s Doubles event, it was another all Canadian Final as Catherine Choi and Talia Ng
competed against teammates Jacqueline Cheung and Tiffany Too for the gold medal. It was
Choi and Ng that claimed the title winning (21-6, 21-8).
The U19 category showcases the best of our young talent that are on the verge of competing
in the senior category. Perhaps one of the most promising athletes is Katie Ho-Shue, earning
a spot on the podium in each event. Katie finished alongside teammate Cara De Belle in the
3/4 position in Women’s Singles, earning them both a
bronze medal.
In the Women’s Doubles event, Katie Ho-Shue and partner Alexandra Mocanu made it to the
Championship Final, but suffered a tough loss to USA (21-15, 18-21, 19-21). Eyota Kwan
and Natalie Lam, another Canadian pair, were able to secure the bronze medal by
competing in the Semi-Final, and finishing 3/4 in the competition.
Putting the tough matches behind her, Katie Ho-Shue remained focused entering the Mixed
Double’s event with partner Brian Yang. Also recognized as a promising athlete and fresh off
a championship win in the Men’s Singles event (21-14, 21-13), Brain Yang was equally

ready to take home the gold medal alongside Katie Ho-Shue. With the last match of the
tournament, Katie was able to capture the gold medal that had been alluding her all week,
winning (21-14, 21-11).
Finishing in the 3/4 position for the U19 Mixed Double’s were two Canadian pairs that
competed with such determination throughout the week. Mathieu Morneau and partner
Eliana Zhang were unable to beat winners Brian Yang and Katie Ho-Shue (21-13, 21-19),
but were able to finish the tournament with bronze. Nicolas Nguyen and Alexandra Mocanu
had extremely tight matches throughout the week, winning (21-14, 19-21, 24-22) in the
Quarter Final, and losing (18-21, 17-21) in the Semi-final.
With some tough losses and spirited wins, the Junior Pan American Championships were
full of excitement and thrill as athletes who competed throughout the weeklong competition
were able to claim their spot on the podium.
“Congratulations to all the Canadian athletes and coaches on their excellent performance on
home soil! It was fantastic to see the diversity of countries who participated in this
tournament and who finished on the podium” said Anil Kaul, President of Badminton
Canada.
“We are very proud of the results that all our Canadian athletes had at the Junior Pan Am
Championships” said Jordan Bridal, High Performance Manager. “With the Government of
Canada and Own the Podium placing a large focus on the Next Generation of athletes, we are
excited for the potential of our Canadian badminton athletes and we are excited in playing a
role in their continued success.”
“I hope this event inspires our players to aim high and continue to work hard in meeting
their goals. There is still much work to be done, but I know our Canadian athletes are up for
the challenge” concluded Head Coach, Mike Butler.
For a full list of 2017 Junior Pan Am Champions and medal winners, please follow the links
below: 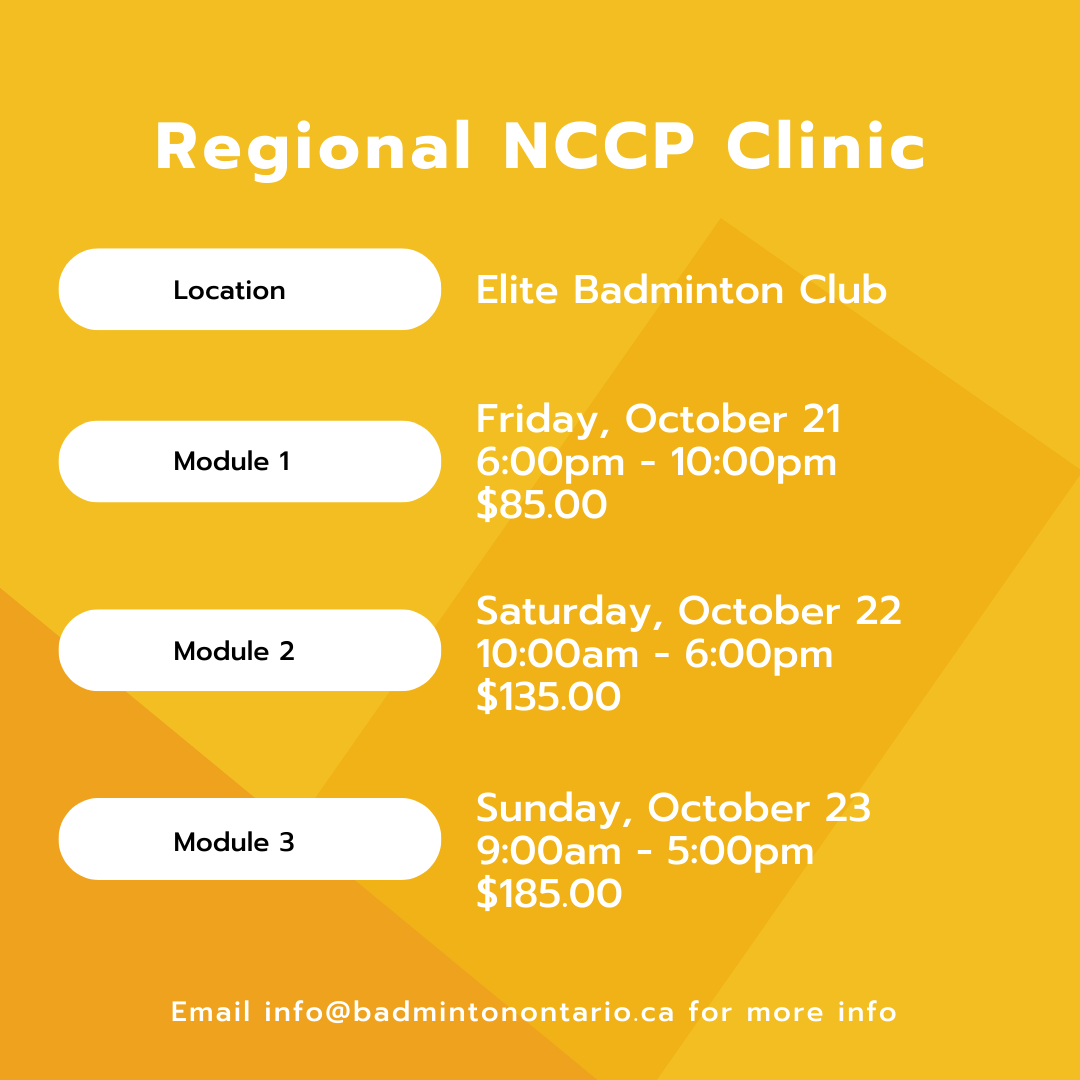 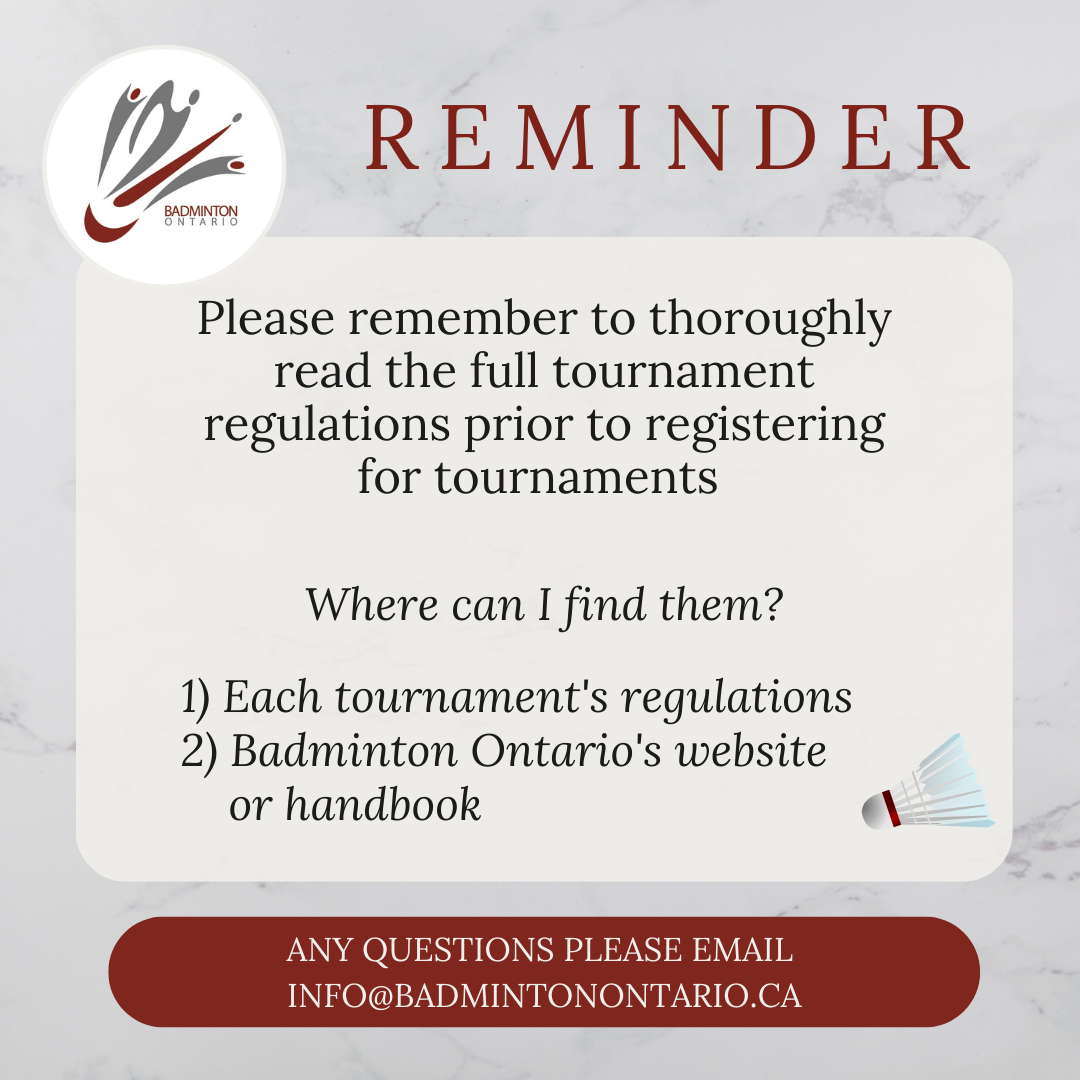 22.23 Black Knight Junior A High Performance Series This tournament series is designed for athletes who are training several times a week to compete at an Elite level. The series 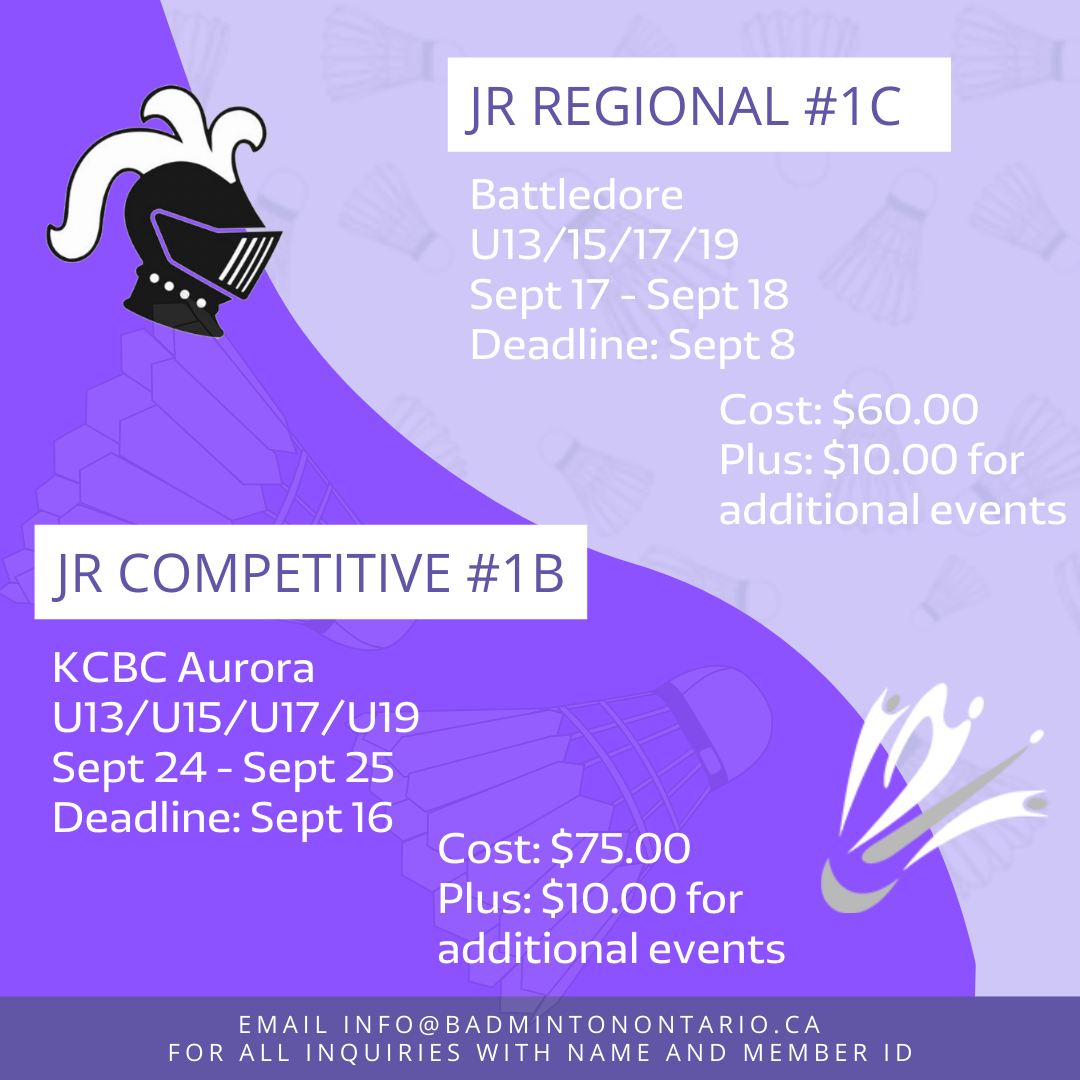 As we approach the 22.23 season, clubs need to re-affiliate with Badminton Ontario. Clubs must be affiliated before their clubs will have the ability for their members to participate in BON/BCAN